We’ve had a special relationship with one of our grandsons since his birth when we lived a short bus and subway ride away and began to take care of him, one day a week. He is one of five grandchildren now, yet that early bond remains intact. When we have an opportunity to spend some time with this boy, we always seize it. So today, while his mother attended a business meeting, we picked him up from a swim class, and because it was a beautiful day in South Florida and we had a few hours, we decided to take him to a marine life center that opened last year.

We live in an area where loggerhead and leatherback turtles lay their eggs in season, and most mornings when we walk on the beach, we can see their tracks as they crawl up the sand to deposit their eggs. By 9 or so, teams of volunteers have arrived to mark the nests so strollers don’t disturb the eggs. The center is devoted to rescuing hatchlings and nursing injured or sick turtles that get washed up on the beach back to health, so there were both species to see today, as well as tanks filled with sea anemones, fish and hermit crabs. 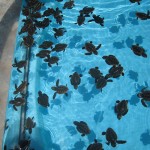 Today, we had a special treat because one of the teenage turtles was due to be released back into the ocean. There was a good crowd on the beach and a news crew had been alerted. Our grandson was completely captivated by what was unfolding, from the strapping of the turtle onto a gurney, to the wheeling of it down to the beach where a space had been cordoned off for the release itself. We were in the escort party. This female turtle, a volunteer informed us, would probably head right for the Gulf Stream where it has the best chance for survival. Years from now, it will return to the place where it hatched — perhaps even this very beach — and drop its own eggs, one of the great mysteries of navigation.

When the rescued turtle saw or perhaps smelled the water, it began to struggle a little against its restraining straps, and as soon as these were removed, flopped off the gurney and began to crawl toward the waves. A big wave washed over it then another and suddenly it was floating, swimming, and gone. Freedom! We all desire it for ourselves, for other creatures. The crowd cheered. The news cameras rolled. Some day in the future, the three of us will share the uplift of this indelible moment. A reminder of how good life is.